(6 of the 65 paintings in the entire exhibit)

There is comfort in the mundane and in what is predictable. In this stagnant and comfortable space there may be contentment, but there is no growth. In my art I like to explore how we manage difficulties that come our way throughout life. How we grow from processing what is uncomfortable to us. In my current series which I call Organic Forms, I explore this journey of energy, struggle, growth, blockage, and abundance. I create these from a place of exploration through a meditative process. Abstract shapes that explore the journey of energy in motion and the movement toward growth.
My Baltimore Monsters also work on this same principal, but from a different perspective. The destruction and transformation of places and beings that may hold a comfortable place in the psyche. To be challenged by observing what is familiar and to view it in a new way. How there is beauty in places of ruin and horrors in places of beauty. 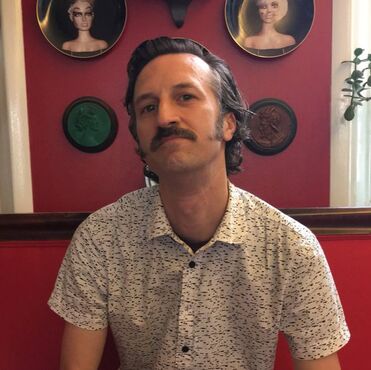 Scott Philip Goergens (b. 1973) grew up outside Baltimore, and after many moves across the country he now lives back in the city. Scott was awarded an art scholarship from the state of Maryland with the guidance of his High School teacher Olin Yoder. He used the scholarship to receive a general associates degree from Catonsville Community College (1993), where he concentrated electives in some art courses and chose to continue his art career on his own by developing his skills in various mediums and styles - learning from trial and error with acrylic, oil, sculpture, ink, and watercolor. With his husband, Scott lived in San Fransisco, Boston, North Carolina, and Norfolk, but it wasn't until moving back to his home town of Baltimore, Maryland did he complete his first painting series and land his first public show in 2001.
Scott is also a writer (You Are Now Leaving Torporville - Vantage Press 2004) and an award winning filmmaker (29 Needles - 2019 "Best of the Festival - Nightmares Film Festival).
Scott worked as a Casting Associate for Emmy award winning Pat Moran, CSA from 2010-2017 and during that time period she received many nominations and awards - as well as two more Emmy wins for HBO's VEEP and HBO's Game Change.
In 2018 Scott and his husband opened Gallery Blue Door to compliment and add to the cultural landscape of his neighborhood of Mount Vernon, Baltimore.​