Monsters and the monstrous, have been subjects that have been a focus of my art. The destruction and transformation of places and beings that may hold a comfortable place in the psyche. To be challenged by observing what is familiar and to view it in a new way. Sometimes even to sit with what is uncomfortable, and to consider how to navigate or process it.
I play with misconception and depict people the way I see them. Sometimes they are fantastic and bizarre creatures - wondrous, soulful, and caring. They can also be dark and ominous and even be painted as a typical person that is unaware of the complex stories and interactions that are happening around them. 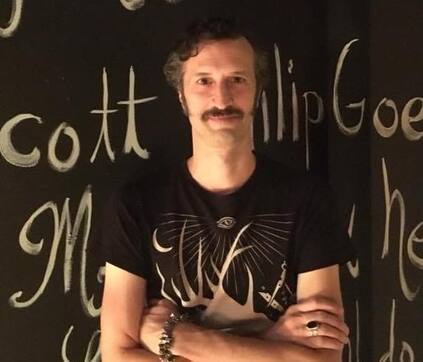 Scott Goergens grew up outside Baltimore, and after many moves across the country he now lives back in the city. Throughout grade and high school levels he gravitated toward the arts and concentrated his efforts while in and out of class. Scott was awarded an art scholarship from the state of Maryland with the guidance of his High School teacher Olin Yoder. He used the scholarship to receive a general associates degree from Catonsville Community College (1993), where he concentrated electives in some art courses. He eventually decided college was not for him and chose to continue his art career in a less formal fashion. He continued to learn and develop his skills on his own in various mediums and styles - learning from trial and error with acrylic, oil, sculpture, ink, and watercolor. During the next decade after college, Scott Philip Goergens moved to San Fransisco, Boston, North Carolina, and Norfolk with his husband, but it wasn't until moving back to his home town of Baltimore, Maryland did he complete his first painting series and land his first public show in 2001. His styles/technique adapt to compliment each series he is working on, but there is always a defined connection to theme and execution.
Scott is also a writer and a filmmaker and his first feature film 29 Needles was shot between 2006-2009. After years in post-production, it's world premiere was at the Nightmares Film Festival (2019), where it was nominated for Best Midnight Feature, and Best Lead Actor, and won The Film From Hell - The Best of the Festival award. His first book, “You Are Now Leaving Torporville” was published by Vantage Press in 2004, and continues to receive praise and recognition from the arts community. Scott worked as a Casting Associate for Emmy award winning Pat Moran, CSA from 2010-2017 and during that time period she received many nominations and awards - as well as two more Emmy wins for HBO's VEEP and HBO's Game Change.
In 2018 Scott and his husband opened Gallery Blue Door to compliment and add to the cultural landscape of his neighborhood of Mount Vernon, Baltimore.